All JavaScript functions can use events as parameters. An event is an object that is created when a function is called. It is literally a JavaScript object that has a list of properties that can be used. You can see a list of event properties here: https://developer.mozilla.org/en-US/docs/Web/API/Event.

Events have properties that carry information about user actions. For example, an HTML input can call a function every time that it changes. The function that is called can use the value of the input.

The event target is the most commonly used property of event objects. Since it references the ui element, the developer can immediately use the target to get data, update the UI state, or perform some other function. The target also provides a lexical context that enables the developer to access other UI elements such as the the parentNode or childNode.

The event target is commonly used to manage text inputs in React. Since React does not use two-way data binding, state must be updated explicitly through functions that use events as data resources.

The map() method returns a new array with the results of calling a function for every array element. Array.map takes a function as a parameter and passes each item in the array into that function. The output of the function is passed into the final array.

The for each method is an array method that is more declarative way to write a loop. 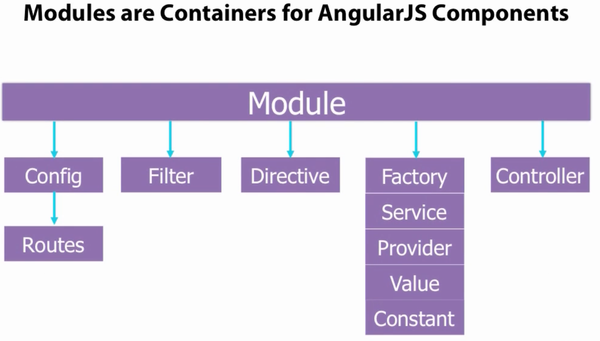 The module is Angular's overall container. It contains all controllers as well as all other AngularJS code. The Angular module is created with the following code in a javascript file:

Configuring Webpack to transpile React code is simple. Once you know how to set up your basic webpack.config.js all you have to do is install a new babel preset! Install the react preset for babel by running: npm install --save babel-preset-react. Now,